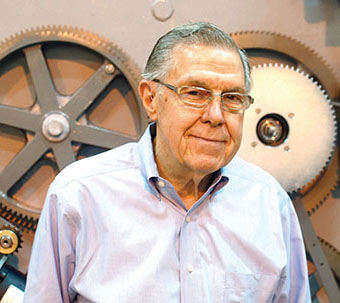 MILWAUKEE, WI — Federal Manufacturing, powered by ProMach, announced the retirement on May 31 of Otis Cobb, President and a Principal of the company. Frank Johanek will continue to lead Federal as vice president and general manager.

Federal is the leading dairy filling equipment company in the United States, with about 85 percent of the market. Cobb credits the durability and simple design of Federal’s filling machines with the company’s success – machines the dairy industry can depend upon. “We have machines that are 50 years old that are still running, still being used every day,” Cobb said.

The same dependability and quality of service characterizes Cobb himself, who began his dairy foods career in 1958 with Sealtest Foods. He later worked for M.G. Newell Company, a firm that distributed dairy processing and filling machinery for a number of companies, including Federal. David Fee, who founded Federal Manufacturing in 1946, urged Cobb to join him. Cobb did, starting as sales manager in 1979. He was able to purchase stock in the company, becoming over time a principal owner. He was promoted to president of Federal in 1992.

Cobb partnered in Federal’s development of a new type of filling valve for lightweight plastic bottles that he cites as the company’s greatest innovation during his tenure. He oversaw Federal’s move into large models of fillers and capping systems, all still in use today. Federal expanded its export market under Cobb’s leadership, first to the UK and other commonwealth nations, and later to the Middle East. The company developed the ability to fill products aseptically, extending the shelf life of dairy products.

Otis Cobb grew up on a tobacco farm in North Carolina, and graduated from North Carolina State University with a degree in natural science and dairy and food manufacturing. “My advisor said to me as long as boys and girls are growing up, falling in love, getting married, and having kids, there will always be work in the dairy and food industry,” remembers Cobb.

The population trend has changed since he received this advice in the 1950s, however, and Cobb cites the decline in population growth and per capita consumption of dairy products as one of the top challenges in dairy manufacturing today. Specialist products such as soymilk and almond milk also subtract from sales of basic dairy products.

Challenge leads to opportunities, however, and Cobb thinks development of new products, such as “grab and go” small sizes of flavored milk, will appeal to consumers and boost the dairy industry.

As for retirement, Cobb says “This will be the first time in 55 years that I will not be drawing a paycheck. It will take some getting used to. During my retirement I will still answer phone calls from my loyal customers if they need my help. They have been my partners for more than 35 years.”

Federal designs, manufactures, and supports complete rotary and inline net weight filling systems for free-flowing liquids. We serve a variety of markets including food and beverage applications such as edible oils, sauces, nutritional drinks, and protein supplements, as well as other high-value retail applications including automotive lubricants and additives, household cleaners and disinfectants, personal care products, agricultural chemicals, paints, and more. Federal’s net weight filling technology is ideal for applications needing exact dosing, with non-contact filling accuracy of ± 0.1% to minimize the giveaway of valuable products. For more than 70 years, Federal fillers have been recognized worldwide for dependable performance in demanding production environments as well as for an overall low total cost of ownership.

← Back to Press Releases